Mystery of the Parah 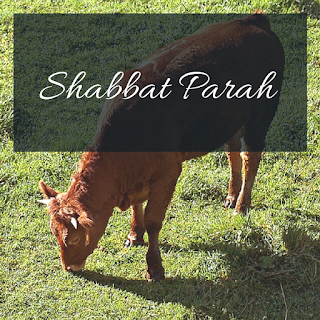 Parasha Parah.  (The portion of the Red Heifer)

·        What is the meaning of the Red Heifer? Our sages and rabbis have struggled with this passage for ages…

According to Chazal: “The law of the Red Cow is described by the Sages as the quintessential "Chuchat HaTorah", (i.e. a "decree of the Torah"), meaning that it is beyond human understanding.”

The midrash states: “These are laws or decrees of God and man has no right to question them.” (Chumash Stone Edition, 2005)

A story from the Midrash says:

“A non-Jew said to R’ Yochanan ben Zakkai, “Your Divine service resembles sorcery.  You take a cow, burn it, grind it and tather the ash.  When one of you becomes ritually impure you sprinkle two or three drops on him, and declare him cleansed!”  R’ Yochanan explained to him that it was not sorcery, but a spiritual remedy against impurity.  His students, unsatisfied by this, asked, “Him you put off with a vague reply, but what say you to us?” Yet, he offered them no answer, explaining that the mitzvah has no reason, and concluding, “Hashem said, ‘I have laid down a decree.  Do not transgress it.’  According to R’ Yochanan ben Zakkai, both the impurity of the dead and the purity of the Red Cow are part of the "chok.” (i.e. "decree").

·        Our Sages and rabbis debate and find no logical explanation for this "chok". However, there is nothing in the Torah that is meaningless, everything has a meaning, and while some of our people still have the blinders on and cannot see what the purpose is to this mitzvah; those of us who’ve had the veil removed and have received Ruach Hakodesh, this mystery has been revealed.  The Torah itself says "do not say these mitzvoth are too far for us or too high for us, but they are near us and in our hearts".

The mystery of the Parah can be revealed to us if we open our hearts to the wisdom and the Spirit, and the mind of Messiah.

When solving any mystery, we must first look for clues.  The Torah as well as all Scriptures always gives us the clue.  The first clue here in understanding the mystery of the Parah, is the fact that the Red Heifer is burned “outside the camp”.

The Rambam and other sages agree that the Red Heifer is a sin offering (chatas), atoning for ritual impurity; therefore, it is identical to that of the Yom Kippur scapegoat offering which was also taken outside the camp.

Some sages see the "Chok" (i.e. decree) of the Red Heifer as a reaction to the sin of the Golden Calf.  Just as the Heifer is ground up so too was the Golden Calf "ground up"…

Exodus 32: 19 But the moment Moshe got near the camp, when he saw the calf and the dancing, his own anger blazed up. He threw down the tablets he had been holding and shattered them at the base of the mountain. 20 Seizing the calf they had made, he melted it in the fire and ground it to powder, which he scattered on the water. Then he made the people of Isra’el drink it.

·        Now, the Torah states that when a person is put to death it is always done “outside the city gates”…

Devarim 17: 5 then you are to bring the man or woman who has done this wicked thing to your city gates, and stone that man or woman to death.

"The place of stoning was as the height of two men. One of the witnesses pushed him down by his hips. If he turned over face downward, he turned him on his back. If he died from the blow and the fall, that was enough. But if not, the second witness took a stone and dropped it on his chest. If he died from this, that was enough. But if not, his stoning had to be carried out by all Israel, as it is said, 'The hand of the witnesses shall be first upon him to put him to death and afterward the hand of all the people' ( Deuteronomy  17:7) ." (Sanhedrin 6:4)

John 19: 17 Carrying the stake himself he went out to the place called Skull (in Aramaic, Gulgolta). 18 There they nailed him to the stake along with two others, one on either side, with Yeshua in the middle. 19 Pilate also had a notice written and posted on the stake; it read,
YESHUA FROM NATZERET
THE KING OF THE JEWS
20 Many of the Judeans read this notice, because the place where Yeshua was put on the stake was close to the city; and it had been written in Hebrew, in Latin and in Greek.

·        This first clue that the Red Heifer was burned “outside the camp” points us to Yeshua the Messiah, as He too was sacrificed outside the camp…

Yeshua is the Sin-Offering!

Hebrews 13: 10 We have an altar from which those who serve in the Tent are not permitted to eat. 11 For the cohen hagadol brings the blood of animals into the Holiest Place as a sin offering, but their bodies are burned outside the camp.[c] 12 So too Yeshua suffered death outside the gate, in order to make the people holy through his own blood. 13 Therefore, let us go out to him who is outside the camp and share his disgrace. 14 For we have no permanent city here; on the contrary, we seek the one to come. 15 Through him, therefore, let us offer God a sacrifice of praise continually.[d] For this is the natural product of lips that acknowledge his name.

Now I fully realize that what I am teaching is very controversial in Rabbinic Judaism, but the clues of Scripture all point us to the same conclusion. Rabbinic Judaism says that God would never accept a Human sacrifice.  And while it is true that the Torah forbids us from taking our own children to be sacrificed, there are many paradoxes within Scripture…

Just as the rabbis say they cannot rationally, and intellectually understand the chukat of the Red Heifer, so to can it be hard to understand how the Father could send His Son to be an atoning sacrifice…because it seems to contradict Torah…

“R’ Yehoshua of Sachnin, quoting R’ Levi, describes the difficulty of understanding this law, and lists a number of other mitzvos we are tempted to question…

If one’s brother dies after being children, his wife is forbidden, Yet if he dies childless it is a mitzvah to marry her.

The Torah forbids shatnez yet to wear tzit-tzit of wool on a garment of linen, or vice versa is permitted.

One who touches the scapegoat becomes impure and must wash his clothing. Yet casting the animal over a cliff atones for the Jewish people. Those who deal with the Red Cow become ritually impure whereas the Cow itself purifies others.  These contradictions cannot be answered.”
Furthermore the Midrash says:

“One paradox of the Read Cow is that it’s ashes purify people who had become contaminated; yet those who engage in its preparation become contaminated.  On this theme the Midrash cites the verse, “Who can draw a pure thing out of an impure one?  Is it not the One God? (Job 14:4).”
·        Therefore we see another clue, that even the Midrash cites this verse in Job that it is only God who can make something pure out of something unclean…

The Messiah must be Divine then, and it must only be God who can take something forbidden and make it Pure and atone for all of our sins…

In a similar vein, the Midrash notes a number of such paradoxical cases of righteous people who descended from wicked parents: Abraham from Terach, Hezekiah from Ahaz, and Josiah from Ammon.  The Talmud add the paradox that it is forbidden to drink blood but an infant nurses from its mother, whose blood is transformed into milk to become the source of life. (Niddah 9a)…

·        And ladies and gentlemen just as this is true with the blood of a mother which becomes the source of life for her child so too is the Blood of Messiah the source of our Eternal Life!!!

John 19: 28 After this, knowing that all things had accomplished their purpose, Yeshua, in order to fulfill the words of the Tanakh, said, “I’m thirsty.” 29 A jar full of cheap sour wine was there; so they soaked a sponge in the wine, coated it with oregano leaves and held it up to his mouth. 30 After Yeshua had taken the wine, he said, “It is accomplished!” And, letting his head droop, he delivered up his spirit.

31 It was Preparation Day, and the Judeans did not want the bodies to remain on the stake on Shabbat, since it was an especially important Shabbat. So they asked Pilate to have the legs broken and the bodies removed. 32 The soldiers came and broke the legs of the first man who had been put on a stake beside Yeshua, then the legs of the other one; 33 but when they got to Yeshua and saw that he was already dead, they didn’t break his legs. 34 However, one of the soldiers stabbed his side with a spear, and at once blood and water flowed out.

Yeshua the Messiah is the meaning of the Red Heifer…

Hebrews 9: 13 For if sprinkling ceremonially unclean persons with the blood of goats and bulls and the ashes of a heifer restores their outward purity; 14 then how much more the blood of the Messiah, who, through the eternal Spirit, offered himself to God as a sacrifice without blemish, will purify our conscience from works that lead to death, so that we can serve the living God!

Yes it is a paradox, and yes it is beyond logic and human understanding… but when you open your heart and mind to the Ruach Hakodesh, He will illuminate your heart with the Truth.

·        You need the Messiah’s Blood; you need His cleansing Water sprinkled on you.

Hebrews 9: 18 This is why the first covenant too was inaugurated with blood. 19 After Moshe had proclaimed every command of the Torah to all the people, he took the blood of the calves with some water and used scarlet wool and hyssop to sprinkle both the scroll itself and all the people; 20 and he said, “This is the blood of the covenant which God has ordained for you.” 21 Likewise, he sprinkled with the blood both the Tent and all the things used in its ceremonies. 22 In fact, according to the Torah, almost everything is purified with blood; indeed, without the shedding of blood there is no forgiveness of sins.

23 Now this is how the copies of the heavenly things had to be purified, but the heavenly things themselves require better sacrifices than these. 24 For the Messiah has entered a Holiest Place which is not man-made and merely a copy of the true one, but into heaven itself, in order to appear now on our behalf in the very presence of God.

25 Further, he did not enter heaven to offer himself over and over again, like the cohen hagadol who enters the Holiest Place year after year with blood that is not his own; 26 for then he would have had to suffer death many times — from the founding of the universe on. But as it is, he has appeared once at the end of the ages in order to do away with sin through the sacrifice of himself. 27 Just as human beings have to die once, but after this comes judgment, 28 so also the Messiah, having been offered once to bear the sins of many,[c] will appear a second time, not to deal with sin, but to deliver those who are eagerly waiting for him.