Legend of the Scapegoat and the Scarlet Thread on Yom Kippur 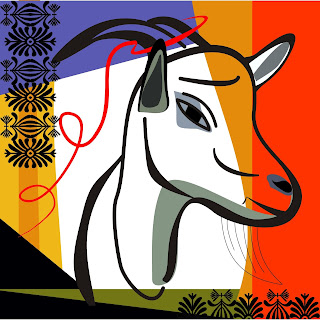 In the Book of Leviticus 16, the Yom Kippur service that was to be conducted by the Kohen Gadol (High Priest) in the Temple and the Kodesh Kodeshim (Holy of Holies); is described.  The Torah describes a strange ritual in where the Kohen Gadol takes two goats, and casts lots choosing which one is sacrificed for Hashem, and the other the Hebrew says "for Azazel"; which is traditionally interpreted as taken out to the "wilderness". While the Torah does not elaborate further on the goat for Azazel, there are more details about a mystical phenomenon that would take place mostly each year when the goat for Azazel was taken into the wilderness and pushed off a cliff alive and backwards.  The Talmud in tractate Yoma 39 says: "The Sages taught: During the tenure of Shimon HaTzaddik, the lot for God always arose in the High Priest’s right hand; after his death, it occurred only occasionally; but during the forty years prior to the destruction of the Second Temple, the lot for God did not arise in the High Priest’s right hand at all. So too, the strip of crimson wool that was tied to the head of the goat that was sent to Azazel did not turn white, and the westernmost lamp of the candelabrum did not burn continually.And the doors of the Sanctuary opened by themselves as a sign that they would soon be opened by enemies, until Rabban Yoḥanan ben Zakkai scolded them. He said to the Sanctuary: Sanctuary, Sanctuary, why do you frighten yourself with these signs? I know about you that you will ultimately be destroyed, and Zechariah, son of Ido, has already prophesied concerning you: “Open your doors, O Lebanon, that the fire may devour your cedars” (Zechariah 11:1), Lebanon being an appellation for the Temple." (Yoma 39b).

Now there is no denying that Yeshua of Nazareth died and was resurrected and witnessed by over 500 people* approximately "40 years" prior to the destruction of the Temple.  But what does this really mean?  There are basically two polar opposite arguments that ignores the plain and simple truth of this matter.  First, there is the traditional Christian view, that simply because Jesus is our "Sin Offering" and our Atonement therefore God nullified Yom Kippur and there is no longer a need for this ritual or sin offering any longer.  Unfortunately, this does not take into account Yeshua's own words in Matthew 5:17 that nothing in the Torah would be abrogated.  Additionally, Scripture shows Jewish believers participating in the ritual sacrifices of the Temple long after Yeshua's resurrection, (Paul's Nazarite vows for himself and four other Jews in Acts 21 is just one example); and this view fails to consider the sacrifices and offerings that are promised to take place in the millennial kingdom of Messiah in passages such as Ezekiel 46-47.

Anti-missionaries such as the infamous Tovia Singer (Jews for Judaism), and other Orthodox critics of both Christianity and Messianic Judaism claim that this passage in Yoma 39b proves nothing about Yeshua being the Messiah; pointing to Shimon Hatzadik as the crux of their argument.  This view says that virtually all miraculous phenomena of the Temple appeared to have ceased or became increasingly infrequent as far back as 200 years BCE in the days of Shimon Hatzadik; and that simply by the time of 30-33 CE/AD they ceased altogether.  The argument Singer makes is that Messianic Jews and evangelicals like to quote this passage from Talmud when it is convenient for us; but he claims we reject Oral Law altogether and therefore we can't have our cake and eat it too.  He/they claim that we either accept the "authority" and inerrancy of the Talmud or we don't, but in their view, we cannot use the Talmud only when it supports our position.

This argument too fails to consider many things.  Number one, Messianic Jews do not outright reject Jewish oral tradition!  We simply keep Scripture as our ultimate Authority for faith, life and practice, and we do not elevate the traditions of the rabbis to the same level as the Bible.  Messianic Jews light candles the same way on Friday nights, we wear tzit-tzit and tefillin just as the rabbis taught us.  We observe the traditions the way the rabbis and sages taught, so long as the tradition does not violate the Scripture we will observe.  Why? For two reasons, we remain Jews and this is what Jews do and this will never change; and because Yeshua our Messiah taught us, "they sit in the seat of Moses, so do everything they tell you, but do not be like them..." (paraphrase)*.  Therefore, we are certainly qualified to use Talmudic and other extra-Biblical literature to support our position that Yeshua is the Messiah with integrity.  The second reason the anti-missionary position against Yeshua having any influence on the cessation of miraculous phenomena in Yoma 39b; is that it fails to explain the primary question at hand.  "Why forty years prior to the destruction?".  Singer makes no attempt to answer this other than pointing to Shimon Hatzadik who actually died 200 years before!  We can't deflect and ignore the obvious.  There is a connection to Yeshua of Nazareth; the question is how does He affect Yoma 39b?

There is a more balanced argument and explanation that keeps the integrity and authority of the Scripture (including Ezekiel 46-47), while not discounting the tradition of Yoma 39b.  First, there is the prophetic word of Hosea:

To add to this, there is also:

2 Chronicles 15 Tree of Life Version (TLV)
15 The Ruach Elohim came upon Azariah the son of Oded. 2 He went out to meet Asa, and said to him, “Listen to me Asa, all Judah and Benjamin. Adonai is with you as long as you are with Him. If you seek Him, He will be found by you. But if you forsake Him, He will spurn you. 3 For many days Israel was without the true God, without a teaching kohen and without Torah. 4 But in their distress they turned to Adonai, the God of Israel, and sought Him, and He was found by them. 5 In those times there was no shalom for anyone coming or going, for there were many conflicts among all the inhabitants of the lands. 6 Nation was crushed by nation and city by city, for God troubled them with every kind of distress. 7 But you, chazak! Do not let your hands be slack for there is reward for your labor.”

8 When Asa heard these words as well as the prophecy of the prophet Oded, he took courage and removed the abominations from all the land of Judah and Benjamin and from the towns that he had seized in the hill country of Ephraim. He also repaired Adonai’s altar that was in front of Adonai’s entryway. 9 He gathered all Judah and Benjamin, as well as those dwelling with them from Ephraim, Manasseh and Simeon—for many had defected to him from Israel when they saw that Adonai his God was with him. 10 So they assembled at Jerusalem in the third month of the fifteenth year of the reign of Asa. 11 On that day they sacrificed to Adonai 700 bulls and 7,000 sheep from the spoil that they had brought. 12 They entered into a covenant to seek Adonai, the God of their fathers, with all their heart and soul.

Just as it was in the days of Asa, so it is in these last days.  There would be a temporary cessation of the Temple, the ritual and the sacrifices, and Yeshua Himself even said that "there would not be one stone left standing on another".* But, in the days of Messiah Yeshua's return, we will see a restoration of the Temple and even the sacrifice, for these things must happen to fulfill the prophecies of John's vision in the Book of Revelation.  Messiah cannot return until the Temple is restored.  Yeshua's prophecy and His death and resurrection were (among many other things) a sign that this was all about to take place (the destruction); but also His own prophetic credentials were validated and established according to...

Deuteronomy 18:15 Tree of Life Version (TLV)
15 “Adonai your God will raise up for you a prophet like me from your midst—from your brothers. To him you must listen.

18 I will raise up a prophet like you for them from among their brothers. I will put My words in his mouth, and he will speak to them all that I command him.  19 Now whoever does not listen to My words that this prophet speaks in My Name, I Myself will call him to account. 20 But the prophet who presumes to speak a word in My Name, which I have not commanded him to speak, or who speaks in the name of other gods—that prophet will die.’

Yeshua's words and His death and resurrection at the same exact time-period as the events described in Yoma 39b, are indication and evidence that HE IS WHO HE SAID HE IS.

“Though your sins be like scarlet,
they will be as white as snow.
Though they be red like crimson,
they will become like wool."
Isaiah 1:18b