1. What did the nation of Ammon do to deserve this punishment from Adonai and what lesson does this teach the nations today?

2. Who are the people of Moav & Seir; and who is described as the glorious country of: Beth-jeshimoth, Baal-meon, and Kiriathaim, and what did they do to deserve punishment?

3. Who is Edom, and what exactly did they do to Judah, how do the commentators describe how this played out in history…?

4. What did the Philistines do to Judah; and who are the Cherethites?

5. What is significant of the mention of the first day of the month in the 11th year; and what did Tyre do against Jerusalem, and how did Yeshua the Messiah mention this and in what context did He teach on it?

6. Describe how the punishment of Tyre in vs. 19-20 have actually been fulfilled in Biblical history?

Posted by Rabbi Eric at 8:13 AM No comments: 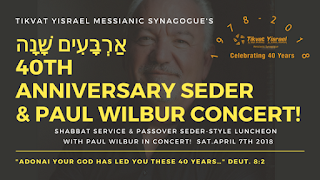 There's an Early Bird Discount, Seating limited, get your tickets soon!
Posted by Rabbi Eric at 7:10 AM No comments:

1. Who is Oholah, and who is Oholibah, what do their names mean?

2. What happened to Oholah, why are Assyrians mentioned and how in Biblical history was this fulfilled?

3. How was Oholibah worse than Oholah in reference to her acts with the Assyrians, what does this refer to?

4. How did Oholibah summon the Babylonians, how was this done in the Biblical historical narrative, and why did she later turn away from them?

5. Why is Oholibah’s youth mentioned and what is the reference to Egypt represent and what does the text mean by saying their flesh is like the flesh of donkeys and whose issue is like that of horses?

6. Why does vs. 31 say that they have walked the way of her sister, what is this a reference to; why is Adonai now delivering her into the hands of her lovers?

7. What exactly was Oholah and Oholibah guilty of doing according to the text?

9. What is the 10th day of the 10th month of the Ninth year, what is this date pointing to and what is significant about it?

10. Explain the meaning and significance of the parable of the rusted pot, explain the symbolism of the corrosion, the boiling, the burning, what does this all mean?

11. Explain the symbolism of Adonai taking Ezekiel’s wife, did Adonai really kill his wife and expect him not to mourn literally, or was this figurative, what do the scholars say?

Posted by Rabbi Eric at 1:06 PM No comments:

2. In vs. 6-12, is appears that the Righteous are punished along with the Wicked.  How is this in line with God’s character in other places in Scripture; and if not, how can this be explained?  Give sources

3. What is the significance of the repetition of the word “sword” in vs. 14 – what two individuals do scholars say this “sword” could belong to?

4. Verse 15 mentions the “rod” and “My Son” how is this interpreted, what does it mean and what is the significance?

6. What is the meaning of the “meaningless divination” and what does it have to do with the number #7?

7. What is the turban and crown a reference of?

8. Why did Nebuchadnezzar not attack Ammon and attack Jerusalem instead; and why are they now judged so harshly by the God of Israel?

9. What exactly is all the blood that was spilled; what is this a reference of; and what is meant in verse 4 about “your days brought near up to your years?

10. How many sins does Ezekiel now list and what was the final one that sealed the deal for Jerusalem?

11. Why is Israel described as a “dross of silver”; what does this description imply about the Jews?

12. In summary, what is the meaning of the phrase, her Kohanim have done violence to My Torah?

13. Was Adonai concerned about a physical wall when He says in vs. 30 that He searched for someone who would build up the wall and stand in the breach; what is the true intention of this language?

Posted by Rabbi Eric at 2:27 PM No comments:

1. Verses 1-4 describe a lamentation for the Princes of Israel, and it’s “mother”, and they are described as a lioness and her cubs.  Who is the “mother” and who is the first cub, and what did he do?

2. Describe how the cub “devoured people”?

4. What did the 2nd cub do that made him different than the first?

5. What does the text mean in describing him as a “young lion”?

7. What is significant about the mention of the cage with hooks?

8. Who or what is the vine that was once fruitful and full of branches and what happened to it; who does this speak of?

10. What is the tenth day of the fifth month of the seventh year?  What is this count referring to?

11. Who were these “elders” were they coming to sincerely inquire of Adonai and how do we know whether they were or were not sincere?

12. What does vs. 7 mean by saying “throw away the detestable things from his eyes, and not defile yourselves with the idols”?

13. Why did Adonai relent from His anger at Israel while they were still in Egypt, what was the reason?

14. Why did Adonai also relent while the Jews were in the “Wilderness”?