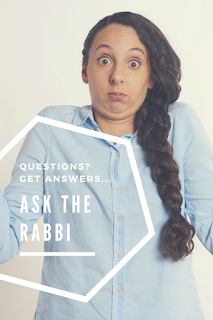 Here is a new one asked of me yesterday, while I appeared on "Ask the Pastor", this was asked of the "rabbi" after the show...

Why did the curtain in the Temple miraculously tear in two at the moment of the death of the Messiah?

Rabbi's answer:  The Hebrew word for that “curtain” in both the Tabernacle of Moses as well as the subsequent Temples, is called a “parokhet”.  In the New Covenant (Brit Chadasha), we learn that the following occurred at the very moment Yeshua gave up His nefesh (spirit)…

Matthew 27:51 Tree of Life Version (TLV)
51 And behold, the curtain of the Temple was split in two, from top to bottom. And the earth quaked and rocks were split apart.

Dr. David Stern, translator of the “Jewish New Testament”, and author of the Jewish New Testament Commentary explains, “The parokhet in the Temple. Exodus 26:31-35 describes this curtain as it existed in the desert Tabernacle. It separated the Holy Place from the Holy of Holies. Only the cohen hagadol (High Priest), was allowed to pass through it into the Holy of Holies; and that he could do only once a year, on Yom-Kippur, to make an atonement sacrifice for his sins and for the sins of the Jewish people. When it was ripped in two from top to bottom it symbolized the fact that God was giving everyone access to the most holy place of all in heaven, as taught explicitly at Hebrews 9:3-9, 10:19-22.  The Talmud bears an amazing witness to the work of Yeshua in altering the system of atonement. The background is that on Yom-Kippur, when the cohen hagadol sacrificed a bull (Leviticus 16), a piece of scarlet cloth was tied between its horns. If it later turned white, it meant that God had forgiven Israel's sin in accordance with Isaiah 1:18, "Though your sins be as scarlet, they will be white as snow."

There is also an additional explanation.  According to MJL: “Kriah is a Hebrew word meaning “tearing.” It refers to the act of tearing one’s clothes or cutting a black ribbon worn on one’s clothes. This rending is a striking expression of grief and anger at the loss of a loved one. When the patriarch Jacob believed his son Joseph was dead, he tore his garments (Genesis 37:34). Likewise, in II Samuel 1:11 we are told that King David and all the men with him took hold of their clothes and rent them upon hearing of the death of Saul and Jonathan. Job, too, in grieving for his children, stood up and rent his clothes (Job 1:20).

It also make perfect “Jewish” sense, that if indeed Yeshua was the Ben-Elohim (Son of God), that the Father Himself was deeply mourned over this death, and the rending of the parokhet in two was indeed the ritual act of Kriah!

The whole purpose of the earthquake, the sky turning black, and the parokhet ripping apart – was all a sign to mankind that this one Man’s death, was unlike any other’s.  That this was indeed a confirmation that this Yeshua is indeed the One and Only Begotten Son of God.

Proverbs 30:4 Complete Jewish Bible (CJB)
4 Who has gone up to heaven and come down?
Who has cupped the wind in the palms of his hands?
Who has wrapped up the waters in his cloak?
Who established all the ends of the earth?
What is his name, and what is his son’s name?
Surely you know!