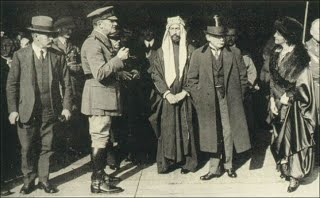 Before dawn on the morning of September 20th, 1918, Indian and Australian cavalry found their way east from the plain of Sharon across the Musmus pass; they approached the ancient hill or Megiddo (Har Megiddo, or Armageddon) guarding the legendary Esdraelon plain.  Field Marshall Edmond Allenby was in command.  Two months earlier, Allenby had been able to be reinforced with troops from France because of the arrival of the Americans in Europe.  Opposing Allenby in the Levant were primarily Ottoman troops under the command of general Otto Liman von Sanders and several notable Turkish generals, including Mustafah Kemal Pasha (Ataturk).  von Sanders and Kemal had crushed the allied British forces attacking the Bosporus;  and they had now been sent to stop the British advance in the east and to put down the rebellion of Faisal and Lawrence (“of Arabia”).
While waiting for reinforcements, Allenby had been reading a newly published book, the first ever translation of Hieroglyphic inscriptions on a column in Luxor.   This translation brought to light a successful strategy used by Pharaoh Thutmose II to attack the Canaanites at Megiddo in 1479 BC.  The Pharaoh had sent his cavalry across the Musmus pass to attack from the rear.  The strategy had been hidden in plain site on an inscrutable pillar for three millennia; it had not been used in any of the nearly 30 subsequent battles that had been fought at Megiddo.

Allenby had been hiding most of his army and artillery on farms in the plain of Sharon.  He made it appear to von Sanders as though he would attack in the east, near the Jordan valley.  He achieved complete surprise when he attacked with artillery and infantry along the Mediterranean coast on the 19th of September.  The Ottoman retreat was so rapid that von Sanders himself was almost captured at Nazareth.  The infantry attack allowed the cavalry access at night to the Musmus pass.
By dawn on the 20th, the cavalry had navigated the pass and emerged at Megiddo on the Plain of Esdraelon.  They encountered a Turkish regiment.  The Indian cavalry charged with lances alone. The surprise was complete; the unsuspecting Turks shot one Indian, while forty Turks were killed by the charging Lancers. The Turks surrendered.  This was the last cavalry charge in history.
British forces poured onto the Palin of Esdraelon, where so many armies for four continents had fought before.  They blocked the counterattack from the east (which was also hampered by Faisal and Lawrence) and cut the rail lines, preventing Turkish retreat to the north. The entire Turkish seventh and eight armies were encircled and captured.

Thereafter, Allenby and the allies drove the Ottomans and Germans out of Syria and Lebanon, despite heroic stands by the outnumbered Turks.  Realizing that the Turkish mainland was indefensible, and that the English would have Kurdish support if they continued north into eastern Asia Minor, they negotiated an armistice.

This last cavalry charge in history was modeled after one of the first cavalry attacks in recorded history.  Without it, the nation of Israel could not have been re-established 30 years later.  Without it, the Ottoman Empire might have survived and continued to have controlled much of the Middle East, at least for a time. But it was also notable in that it followed in a remarkable and underappreciated tradition of major battles at Megiddo.  Because of its location at the one major, pivotal intersection of routes between Africa, the Middle East, Asia and Europe, armies from every major people group on the planet - except the Americas - have fought at Megiddo.  The prophesy is no accident!

2350 BC Pharaoh Pepi I: Egyptians vs Canaanites
1479 BC Pharaoh Thutmose II: Egyptians and Africans vs. Canaanites
1125 BC: Barack and Deborah vs Sisera: Israelites vs Canaanites
1090 BC: Gideon vs. Midianites (Arabs)
1016 BC: Saul and Jonathan vs Philistines
925 BC: Pharaoh Shoshenq 1 vs. Israel
841 BC: Jehu vs Joran (Israel vs. Judah)
8th century BC: A series of Assyrian incursions
609 BC: Pharaoh Necho II (Egyptians and Africans) vs Josiah (on the campaign that led to Carchemish)
(Babylonians, after Carchemish, and later the Persians, conquer without a battle at Megiddo)
(330 BC: Alexander conquers without a battle at Megiddo)
218 BC: Antiochus II vs Ptolemy IV (Greeks)
2nd century BC: Romans
67 AD: Vespasian vs Jews (Romans)
975 AD: Byzantines vs Fatimids
1100-1300: various Northern Europeans (including Richard the Lion Hearted) vs. Arabs and allies
1258 AD: Hulegu (grandson of Genghis Khan; Mongols and Chinese) vs Mamlukes
1799 AD: Napoleon vs Ottomans
1918 AD: Allenby (with Indian and Australian allies) vs Ottomans and Germans